A THOUSAND YEARS OF GOOD PRAYERS 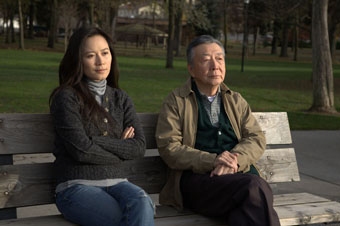 Mr. Shi is a widower and a retired man from Beijing. When Yilan, his only daughter who lives in the US, has a divorce, he decides to visit her in the small town where she works as a librarian. His intention is to stay with her until he helps her recover from the trauma. He is a “rocket scientist,” Mr. Shi likes to tell people he meets in America, and enjoys their attention. But Yilan acts less enthusiastic in his show-off, nor is she interested in his plan to rescue her marriage. When Mr. Shi persists in finding out the reason for the divorce, Yilan starts to avoid him.

Disappointed but not discouraged, Mr. Shi explores the small town and meets an old woman, Madam, who fled the Iranian Revolution to the US. Neither Mr. Shi nor Madam speak English well, but by gesturing and talking in their own tongues, Mr. Shi and Madam start a rare friendship, but the friendship is soon disrupted when Madam’s son sends her away to a retirement home. Facing revelations both from Madam and Yilan’s confrontation that Mr. Shi has never been prepared to face, he finally accepts things as they are, and reaches a small understanding with Yilan and her life.