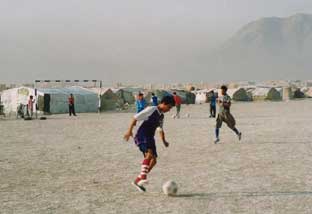 Afghanistan in the summer of 2003, a country hovering between war and peace. Suzana Lipovac from Stuttgart has been working as the director of a German relief organisation in and around Kabul for one and a half years. Financed by the German Ministry of Foreign Affairs and private donations she runs a number of outpatients’ departments to ensure at least basic medical care in the ruined city.

But out in the countryside, things are often far worse. The southeast of Afghanistan where the Pashtuns follow their traditional ways of life is regarded as especially dangerous and hence relief agencies steer clear of the region. Reason enough for the 35-year-old director to try to establish an outpatients’ ward in the desert to the south of Kabul, far beyond the area secured by the international peace-keeping forces. Not an easy job, especially not for a woman …

TO TULSA AND BACKDARWIN´S NIGHTMARE