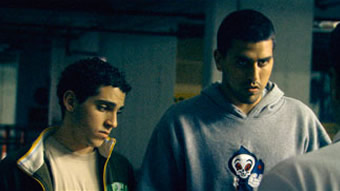 Jaffa’s Ajami neighborhood is a melting pot of cultures and conflicting views among Jews, Muslims and Christians. Back and forth in time, and through the eyes of various characters, we witness how impossible the situation actually is … Sensitive 13-year-old Nasri and his older brother Omar live in fear when their entire family is in danger after their uncle foolishly wounded a prominent clan member. Naive young Palestinian refugee Malek works illegally in Israel to help finance the surgery that will save his mother’s life. Affluent Palestinian Binji dreams of a bright future with his Jewish girlfriend. Jewish policeman Dando is obsessed with finding his missing brother.