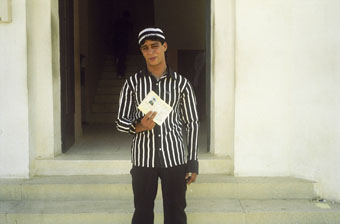 Aladdin’s parents separate when he is three. His father moves with him and his brothers to Tangier and re-marries. Then he leaves the family again and goes to Holland. Aladdin ends up on the street, sniffs glue, polishes shoes and keeps afloat by stealing. Years later, his father returns and finds Aladdin completely down and out. The boy steals from his own father and flees to the mountains, to Ketama. When an inner voice leads him back to Tangier, his father, to whom he is indebted, is dead: the trauma of his life.

Desperate, he searches for a father figure and finds him in Felix, a foreign writer, who takes on the role of the magician in the story of initiation “Aladdin and the Magic Lamp” from §Arabian Nights§. He helps Aladdin to come up in the world and leads him to the discovery of his creative power – his “magic lamp”: Aladdin takes up painting and finally manages to reach his long-awaited getaway to paradise, Europe, where he meets his princess and marries her.