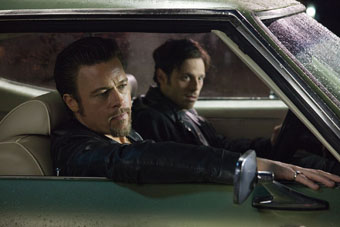 Two pretty dumb gangsters manage to hold up an illegal poker game, steal the players’ money and escape unrecognized. But that has consequences: the card games are organized by the mob, which is supposed to actually guarantee the gamblers’ safety. As long as the thieves are on the run, the games have to be called off.

In order to get things back on track, Jackie Cogan is hired, a professional hit man, the best there is. But things aren’t made easy for him. The mob’s bureaucracy and indecisiveness test his nerves and a once sure-fire colleague turns out to be an unreliable drunk. Cogan’s habit of killing his victims softly, in the safety of anonymity, without actually looking them in the eyes, is yet another hurdle in completing the job.