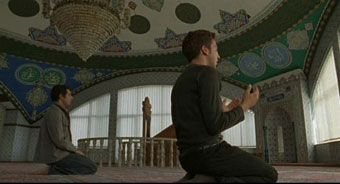 The Arab student Anas and the German student Anne fall in love and marry despite and against the wishes of both their parents. But when Anas is accused by the Federal Intelligence Service of being an Islamic fundamentalist and is arrested, the young couple’s relationship is put to the test. While Anas is in jail, Anne leaves him. And although the accusations of the Federal Intelligence Service prove to be false, the two cannot find a way back to each other after Anas’ release. Anas comes to the realization that not only his in-laws, but also his own family and friends mistrust him. His life is destroyed and he is obsessed with a persecution complex, which in the end becomes his own doom …