ZION AND HIS BROTHER 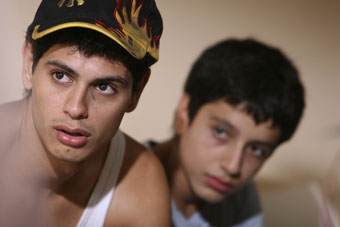 17-year-old Meir and his 14-year-old brother Zion grow up without a father in a run-down area of Haifa. Their single mother is overwhelmed with everyday problems and more worried about keeping her lovers happy than caring for her children. Meir and Zion are inseparable and Meir feels a great sense of responsibility for his younger brother. But one day, Meir takes his role as a protector too far and the boys become responsible for the death of one of their schoolmates. They decide not to tell anyone about the incident, but the secret becomes a crucial test for their relationship. Zion, in particular, has great difficulty dealing with the immense pressure and must decide just how far his loyalty to his brother reaches.