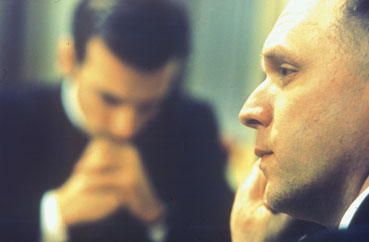 Two systems. The Nazi machinery. The Vatican’s and the Allies’ diplomacy. Two men fight the systems. From the inside, often risking their own lives.

One of them is Kurt Gerstein, an SS officer in Germany. He supplies the camps with Zyclon B but at the same time tirelessly tries to alert the Allies, the Pope, the Germans and their churches to the Nazi crimes, urging them to act or at least to speak out against them.

The other is Riccardo in Italy, a young Jesuit who tries to urge the Catholic church to take action. A fictitious character, he represents all the priests who had the courage to struggle against savagery, often paying for their courage with their lives. The countless priests who openly or anonymously wouldn’t resign themselves to the silence their hierachy kept. At what moment in a man´s life must ethics come before self-preservation? Kurt Gerstein knew of the Nazi crimes and wanted the world to know.