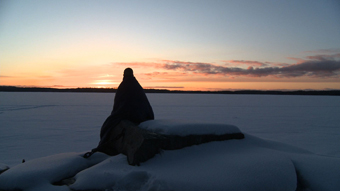 Karl finds the unconscious Johanna at a remote, snowy location. He takes her into his care and provides for her basic needs: warmth, food and sleep. Johanna slowly comes back to life and eventually becomes aware of herself again. Karl gives her time to deal with her memories. He gives her room to breathe.

There was a ghostly relationship in the past – between Nick and Johanna. What at first seemed to be young love, soon became a destructive force. Fleeting shared moments fed the desire for closeness: partying, dreaming, exuberance, begun in naïve hope in a city that could be anywhere.

Johanna’s desire for closeness, however, remains unfulfilled. Nick starts to toy with Johanna and she loses touch with herself. When she can no longer stand the situation and all of his humiliations, she tries to break free and leave him. But Nick brings her back. She tries to start anew and their relationship takes a common turn. Johanna clings on tightly until fate takes hold. A decision for or against herself begins.