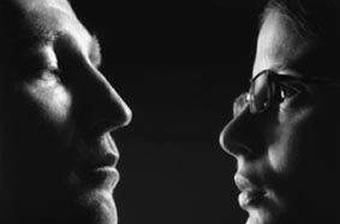 Peter has been having sessions with his psychoanalyst, Karin, for six months. In the course of their abstract game of Q&A during the latest session, Peter – who is hunting for Karin’s lover, Alexander, a suspected serial killer – surprisingly reveals his true identity as detective of the criminal police. Torn between her therapist’s duty and her fascination of Alexander, Karin sees just one way out: Peter has to leave – for good.