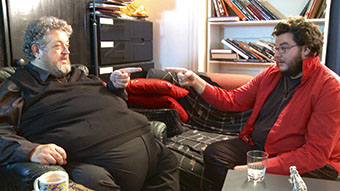 A caustic comedy with two fat gay men. The shoot started without any concept at the airport in Berlin. My actor, the young film director Axel Ranisch, was waiting for Peter Kern, the provocative veteran filmmaker, to arrive from Vienna, a plastic rose in hand. They had not met before. When overweight Peter was wheeled through customs in his wheelchair und Axel deferentially handed him the rose in greeting, Peter indignantly cast it aside and hissed he hated artificial flowers and felt insulted, intimidating Axel. This scene set the tone for the whole four-day shoot. I love conflicts.