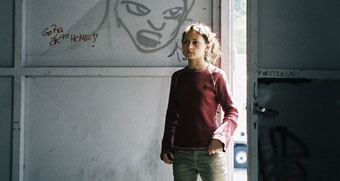 Bitch and her four-year-old brother, Pavel, live as street childen in Bucharest, until she meets Cristu, an ex-policeman who offers her a “deal”. Three months later, she finds herself in Germany sharing a dilapidated flat with three other Romanian children. They’ve been trained as pickpockets and are brutally forced to rob pedestrians eight hours a day. Any contact with outsiders is forbidden.

Then Bitch meets Milka, a young German girl who lives in material luxury but emotional poverty and through her gets to know a world that is completely alien to her but that attracts and intrigues her more and more. It’s merely the life all young people lead in the West, hanging out, bumming round, having fun and frustration, excitement and hurt and first amourous dallyings, but for Bitch it’s a very new and breath-taking experience: an idea of freedom and happiness. But leading a double life as illegal petty thief and normal youth becomes more and more difficult until she’s in mortal danger …