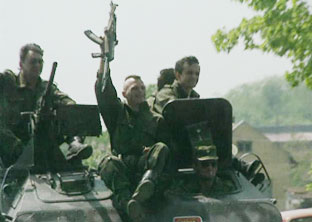 The war raged for many years in former Yugoslavia. The country became a synonym for hate and violence. Many people in Belgrade made opposition against the regime their calling. They formed the roots of the protest movement which eventually led to the fall of Slobodan Milosevic. Stories about things we thought we knew about. A journey into the spirit of a crumbling city. Realizing that every fight in the end is a fight for life.