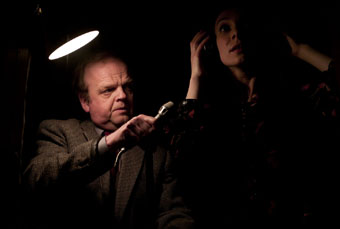 1976: Berberian Sound Studio is one of the cheapest, sleaziest post-production studios in Italy. Only the most sordid horror films have their sound processed and sharpened in this studio. Gilderoy, a naive and introverted sound engineer from England, is hired to orchestrate the sound mix for the latest film by horror maestro Santini.

Obliged to work with the hot-headed producer Francesco, whose tempestuous relationships with certain members of his female cast threaten to boil over at any time, Gilderoy begins to record the sound for ‘The Equestrian Vortex’, a hammy tale of witchcraft and unholy murder typical of the ‘giallo’ genre of horror that’s all the rage in Italy.

Only when he’s testing microphones or poring over tape spooling around his machines does this timid man from Surrey seem at ease. Surrounded by Mediterranean machismo and, for the first time in his life, beautiful women, Gilderoy, very much an Englishman abroad, devotes all his attention to his work. But the longer he spends mixing screams and the bloodcurdling sounds of hacked vegetables, the more homesick he becomes for his garden shed studio in his hometown of Dorking.

The violence Gilderoy is exposed to on the screen, day in, day out, has a disturbing effect on his psyche. He finds himself corrupted, yet he’s the one carrying out the violence. As both time and realities shift, Gilderoy finds himself lost in an otherworldly spiral of sonic and personal mayhem and has to confront his own demons in order to stay afloat in an environment ruled by exploitation, both on and off screen.