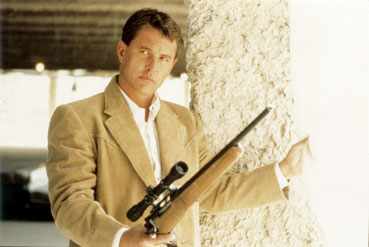 In this film, the background is the murder of Denver radio talkshow host Alan Berg. Following the spectacular murder of a Jewish radio talkshow host in Chicago, young FBI agent Cathy Weaver receives her first secret assignment. Under the cover of a harvest helper, she is to befriend Gary Simmons, a farmer and the prime suspect in this murder case.

Simmons, a highly decorated Vietnam veteran, cultivates his farm in Illinois as a single father of two, having lost his wife a few years ago. Cathy soon feels attraced to the young widower and falls in love with him, especially since she at first can’t believe him capabale of perpetrating the crime. Simmons, too, falls in love with Cathy and soon grows to trust her enough to talk to her about the hate he as the leader of a group of extreme right-wing racists feels towards all “vermin”: gays, Jews, blacks.