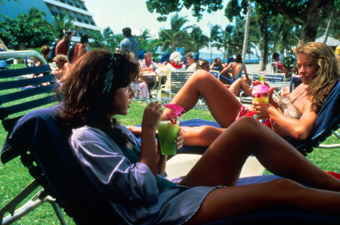 After an elaborate identity change, Catherine makes moves towards philanthropist William Macauley and to that end educates herself about American Indian artefacts and fashions herself into his dream woman. At the same time, Alex Barnes from the Justice Department accidentally stumbles onto the cases and becomes sufficiently intrigued to delve further into them until she becomes convinced it is the same woman who has killed these men.

Receiving grudging permission from her boss Bruce, Alex goes undercover to track down Catherine but cannot prevent Macauley’s death. Eventually she catches up with her in Hawaii where two women not just meet but become close friends.

Catherine even introduces her to Paul Nuytten, an international hotel tycoon, whom she is usty trying to ensnare. Impressed as he is with her charms, he becomes involved with Alex, too. None the less, he marries Catherine. Soon afterwards, he is found dead …