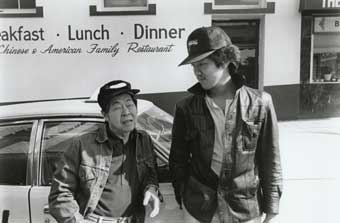 Two Chinese-American cabdrivers, Jo, a middle-aged man, and his talkative younger partner, Steve, are searching the streets of San Francisco’s Chinatown for a recently arrived immigrant, Chan Hung. Chan is a fast-operating Taiwanese businessman friend who has gone missing with $4,000 of their money they gave him to hold for a taxi medallion they plan to buy.

The search takes them to Chan’s estranged wife, an Americanized lawyer, who laughs Chan off as someone who can’t change because he’s “too Chinese.” The more they learn about the man, the more confused they become, as they hear rumours he might have returned to Taiwan, has business ties with Communist China, was involved in a scuffle between rival political sides during a New Year’s parade, was guilty of a minor traffic violation on the day of his disappearance …

THINGS BEHIND THE SUNCALIFORNIA SUNSHINE