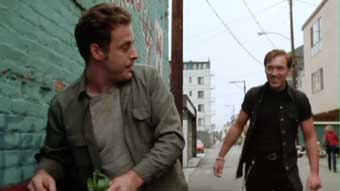 Ruthlessly ambitious Gwen will do anything to ensure her position as the next pop star, and nothing short of international stardom will suffice. To get by, she works as a housekeeper for Liz, a production designer who is paralyzed by self-help mantras and whose “genital area is completely blocked,” as says her “openness counselor.” Her best friend is former slasher movie queen Eva who’s now asked to play Christina Ricci’s mother and who lives with Clive, an ’80s rock hero. One of his former lovers dumps a kid at his door – his kid, she says – and disappears. The kid hates his name, which is Nirvana. Clive again belongs to a band of ageing rock stars determined to recapture their erstwhile fame, and an ageing millionairess is willing to put up the money – on condition Burt sleeps with her, but he’s into young girls …