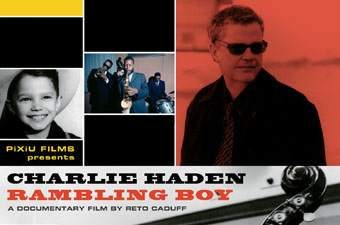 He doesn’t limit himself to one musical genre but has been involved in jazz and country, pop and classic, and even contemporary electronic composers. He is regarded as one of the best jazz bassists in the world. His lyrical style, one of his integrative strengths, was made famous with the Ornette Coleman Quartett – the band that single-handedly gave jazz of the 50s a new face.

From his beginnings, he defined the role of the bassist not as that of an accompanying musician, but gave it its own voice. Hearing Haden speak of his work, it is immediately recognizable that he truly believes in the power of music.

Against this backdrop, the film is not merely a biography of a unique artist. Thanks to access to Charlie Haden’s private archives, film excerpts from concerts, studio recordings, a rich selection of interviews with musicians and contemporaries such as Keith Jarrett, Pat Metheny, Bruce Hornsby or Carla Bey, and during three years of shooting, in Los Angeles, New York, Paris, Zurich and Nashville, the Swiss director created a subtle portrait of this exceptional talent.