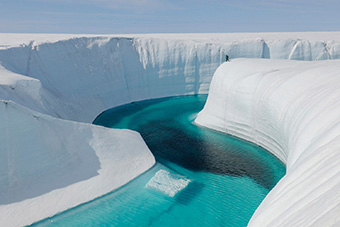 The renowned nature photographer and scientist James Balog was long skeptical about “climate change” and mocked academic nature research. But during his long-term study EIS (Extreme Ice Survey) he came across irrefutable evidence concerning our planet’s change in climate.

For his film CHASING ICE, Balog worked with specially developed time-lapse cameras. With these revolutionary technical devices, he recorded glacial changes over several years. The results are breathtaking images of the consequences of global warming on our fragile planet. Balog’s impressive time-lapse recordings of aesthetic beauty transform years into seconds. He demonstrates how centuries-old icebergs are disappearing at a furious pace.

Balog and his team of young adventurers traveled to some of the most life-threatening regions of the Arctic. The photographer risked not only his career, but also his life, in order to document these dramatic changes.