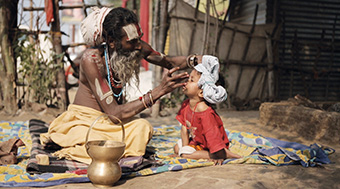 Every twelve years, up to 100 million believers make the pilgrimage to the confluence of Ganges, Yamuna and Saraswati, the invisible, mythical river, to cleanse themselves of their sins and to free themselves from the cycle of rebirths with a ritual bath. This is the time of the Kumbh Mela, the largest festival in the world and one of the most spectacular and impressive events.

In 2013, filmmaker Pan Nalin travelled to the Kumbh Mela and in FAITH CONNECTIONS recounts moving stories from his experience, a young runaway kid, a mother desperately looking for her lost son, an Indian monk, a yogi who is raising an abandoned baby, and an ascetic who keeps his calm by smoking cannabis – all connected by one common faith against the spectacular display of the Kumbh Mela.