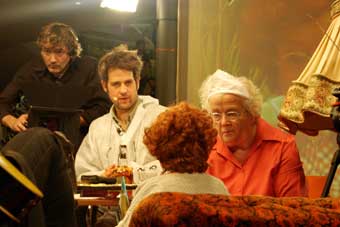 In the foyer of the Berlin Academy of Arts, Schlingensief installs – as he did in 1997 at Talk 2000 – a huge rotating stage, upon which he and his prominent guests search for the truth in pictures. Real and fake celebrities with false and true stories are to stir up the mistrust of media representation in the audience. But conflicts come to the surface backstage.

What begins as entertainment turns more and more into a farce of a talkshow, as Schlingensief discovers on the second day of shooting that his father is dying and the chairwoman of the Green party, Claudia Roth, tells him that a close friend of hers, the Turkish-Armenian writer Hrant Dink, has just be shot and killed. Emotionally upset, Schlingenseif and Claudia Roth themselves, and the subject of death, become the topics of discussion. After the recording, Schlingensief calls off the shooting and travels to Oberhausen to his parents.

Half a year later, in July 2007, the “missing” episode of the pilot is recorded in the Academy of Arts. But this time, completely different: in an analytical discussion with the media theorist Boris Groys, the audience is witness to Schlingensief’s perception of his own media self-exploitation and his self-flagellation of his own sellout. The critical conclusion: the achievement of immortality via the media has become the religion of our times.