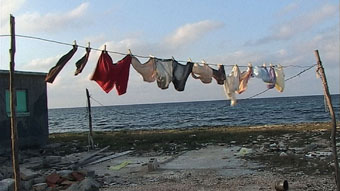 Three countries: Bosnia, Cuba, and Switzerland. Three people: their dreams, their desires. They all have the feeling of being trapped within their own lives. The shepherd Enver is stranded in his loneliness. He lives all alone on Mount Igman in Bosnia, has lost his faith in humanity and says that he has never really experienced anything beautiful. Emilio, a psychiatrist in Cuba, has been censured and is not allowed to leave the country due to his regime-critical stance. He dreams of free spaces, a field full of snow and more “breathing room”. Andrea is a nurse in Zurich and for some time now has had the feeling that she needs to leave this country, a place where “mistakes are not allowed and a mountain is made of every molehill.” The film follows the three for a ten year period. But what was originally intended to be a film about the realization of dreams and desires, develops into a film focusing on such questions as, Who or what really determines our lives? We ourselves? Others? Coincidence? Fate?