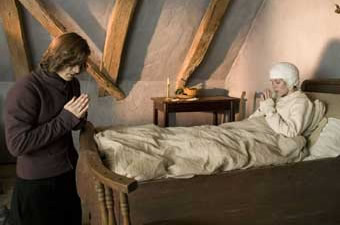 1818 in the Münsterland: Innumerable pilgrims seeking comfort and consolation visit the bedside of Anna Katharina von Emmerich, a nun who shows the holy wounds on her chest, forehead and hands. Clemens von Brentano, an artist in his prime, visits the nun’s sickbed as simple “writer of the wonders of God” to take down her visions and beliefs. He believes himself to be in charge of his life as devout Catholic. The former rake’s encounter with the charismatic nun proves fateful. For both.

The script is based on the novel Das Gelübde (“The oath”) by Kai Meyer and on written records from 1818 from Dülmen, Westphalia. The film takes us on a journey to the early 19th century, employing moments of historic reality and interweaving them with fantastic elements. Anna Katharina Emmerich was beatified by pope John Paul II in Rome on 3rd October, 2004.