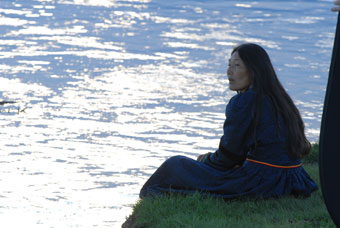 A promise, an old, destroyed horse-head violin and a song believed lost lead the singer Urna back to Outer Mongolia. Her grandmother was forced to destroy her once beloved violin in the tumult of the Chinese Cultural Revolution. The ancient song of the Mongols, “The Two Horses of Genghis Khan”, was engraved on the violin’s neck. Only the violin’s neck and head survived the cultural storm. Now it is time to fulfill the promise that Urna made to her grandmother. Upon arrival in Ulan Bator, Urna brings the still intact parts of the violin – head and neck – to Hicheengui, a renowned maker of horse-head violins, who will build a new body for the old instrument in the coming weeks. Then, Urna leaves for the interior to look there for the song’s missing verses. But she will be disappointed. No one that she meets along the way seems to know the old saga of the Mongols …