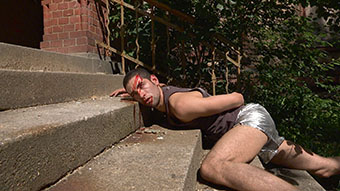 A feature film with twelve drama students from Switzerland in the ruins of the hospital complex in Beelitz. In this film, I wear a pink tulle dress, am raped and killed. I’m followed by more victims. In just a few days, we made an visionary horror movie.

THIS WORLD, THEN THE FIREWORKSEIN VATER STIRBT