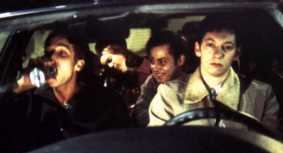 Bene and his friends drive into town to visit an in-club. Arriving there, the doorman refuses to let him inside – as only one. Not wanting to be a spoil-sport, Bene – who acts as their chauffeur – suggests he waits for the others at the snackbar opposite. There, Mia, who’s just dumped her bloke, asks to join him. Somehow, she feels attracted to Bene …