DESERT – WHO IS THE MAN? 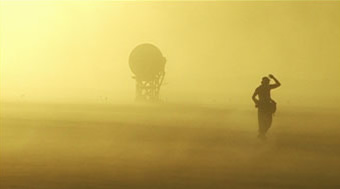 What has modern man lost in the desert? Above all, himself. This documentary confronts, in the nowhere of the desert, strange figures of a long-gone future: scientists, searchers, fanatics and free spirits, the roaming and the stranded, suicides, survivors and mutants. The desert of today does not speak about itself, but about us. Of both the beginning and the end of time, it becomes the projection screen for dreams, hallucinations and visions. In the vastness and magnificence of the desert man is miraculously shown to be what he is: small. An “archeological science-fiction film”, an ecstatic journey far from all material needs.