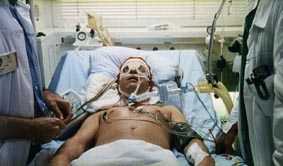 On Christmas Eve, a desperate young man shoots a bullet through his head and is taken to hospital. Lying in the intensive care ward, he is in a critical condition. For several hours he hovers on the brink between life and death.