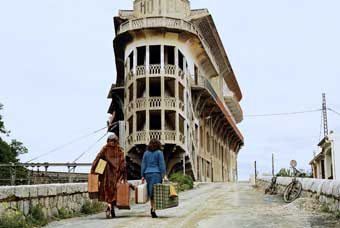 Over a million people lost their lives in the Spanish Civil War, two million were taken prisoner and half a million expulsed from Spain.

Set during these harrowing years between Franco’s putsch and the end of World War II, this is the story of a couple and their undying love. Lawyer Justo Calderón is a glowing Republican who fights Franco both in the trenches and on the radio as the “Voice of the Revolution.” His elegant young wife Manuela is a loving mother to their daughter Paloma and intensely in love with her husband. The young family undergoes all the horrors of the Civil War, all the pain of betrayal, imprisonment and torture, all the anguish of separation.

When Franco’s troops win, Manuela loses all contact with Justo. Alone, without money, she and Paloma struggle to survive. Yet Manuela never gives up believing that she will find Justo again one day. In her tireless search for her husband, she sees a photo in a magazine article on former concentration camp prisoners and becomes convinced that it is Justo. Her search now takes on a new urgency …