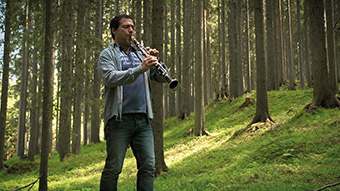 The film tells the story of one of the most renowned orchestras in the world, enriched by archive material from the last thirty years about the great conductors who performed on the most famous rostrum in Rome. Today, this post belongs to Sir Antonio Pappano, an Anglo-American with Beneventian roots who rediscovered an essential part of his Italian origins while conducting the Orchestra Nazionale di Santa Cecilia.

The film documents the planning and performance of a great project, shows how the sound ripens from the first rehearsal to the final applause in the sold-out concert hall and what happens within the musicians before they enter the stage and how they release the tension at the end of the concert.

Given the personal histories of the orchestra’s members and conductor, who were also filmed at the places of their origins, the film provides insights into a fascinating world, otherwise concealed. Simultaneously, it tells the story of a national institution, of a historically singular development, of an approach to life that is characteristic for a country which is loved by many, but sometimes misunderstood and even underrated in its unknown variety.