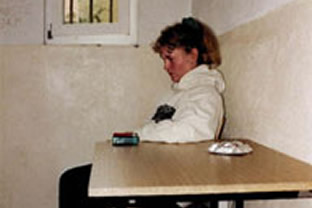 In the summer of 1999, two little children in Frankfurt/Oder died of dehydration. Their mother, Daniela J., then 23 years old, had left them in her apartment on their own for a fortnight. The unemployed woman, coming from a very difficult family herself, has given birth to four children by four different fathers within six years, the first when she was 17. Two boys remain with her, the other two either find adoptive parents or are raised in the family. Daniela meets another man, the love of her life, as she believes. She goes to stay with him, leaving the children on their own. The two boys die an agonizing death.

Daniela J’s trial creates an uproar. The media and curious onlookers crowd the court room. Agitated neighbours scream, „the death penalty’s too good for her“. The accused’s mother doesn’t have one good word to say about her daughter and incriminates her whenever possible. Friends say that Daniela J. neglected her children. The youth welfare office claims not to have noticed anything. Daniela J. is sentenced to life imprisonment for murder in two cases. Is Daniela J. the only one to blame for the children’s death? Did she deliberately let them die? Was their death a string of unfortunate events or the cruel ending to a tragedy that had started long before?