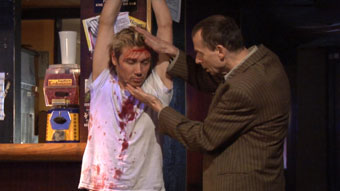 The Renz, a former Viennese cabaret and brothel where once Josefine Baker was fêted, is the last refuge for a society close to the abyss. Life is reduced to escape. Everyone flees the others. The nightclub’s proprietor sings of “killing the one you love”. The elderly diva and her repressed husband live with yesterday’s garbage. The husband imagines an illusionary audience. His spouse, the veteran performer, refuses to believe nobody wants her back on stage.

Enter into this desolate world sex offender Lucien who’s searching for his lover, Java, only to find in him his murderer. A blind man sells mere trash, leftovers of a time when Vienna used to be the city of light opera. Gays, murderers, criminals and a mysterious waiter tell us an epic tale of death and the attempt to be loved.