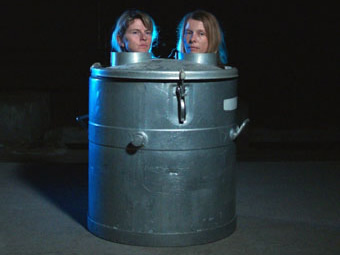 In an underground labyrinth, a writer is holding two women hostage. He wants to experience with their limits, at the climax. He tortures them physically and psychologically. But his methods don’t lead to the desired results. His publisher, an obscure woman, forces him to go further and further. The torture becomes more and more bizarre. Rules are established, only to be immediately broken. It seems to be a fight against time, for a countdown clock is ticking toward zero. And then what happens?

The writer says: “Borderline experiences are only possible at their limits. But where is the border, where is the tollkeeper?” Nothing is as it appears.