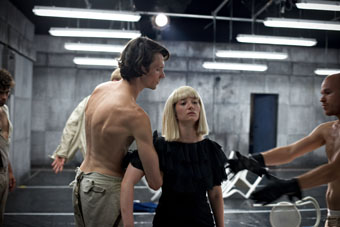 Fine suffers from the fact that she seems invisible to the world around her, but she does everything she can to be inconspicuous, even though she is an actress. At night, when her handicapped sister Jule cannot sleep and bangs her head against the wall, Fine turns on the recorder and performs for her, singing and dancing. But in acting school, she is too shy to tread the boards.

When the renowned director Kasper Friedmann invites her to an audition, she convinces him with her talent. He sees her as a vulnerable creature that corresponds to his vision of Camille, the leading role in his next play. Fine is offered her first big role, one that she really wants to make work.

She slips into another identity: as Camille, she awakens to her femininity but loses her own strength in dealing with her everyday life with her sister Jule, for Camille is not only self-confident and sexually hyperactive, she is also psychological unstable and self-destructive. Fine puts herself into the hands of a director who sends her on an emotional roller coaster ride, without offering any sort of psychological support. A dangerous game is set off, bound to turn Fine into her own worst enemy.