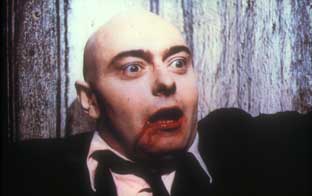 The (authentic) case of serial killer Fritz Haarman, the infamous “Butcher of Hanover”, who wreaked havoc after World War I, transferred into the post-World War II years: A black marketeer and police informer enticed young boys run away from home to his place, killed them (according to his account by biting their throats), dismembered their bodies and sold the edible parts as meat.