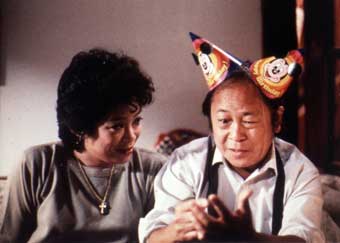 Mrs. Tam, a widowed mother, lives with her youngest American-born daughter Geraldine in San Francisco’s Chinatown, her older children having already left home. Geraldine, thirty years old and unmarried, is a graduate student who wants to live on her own but tells herself that she should stay at home with her mother and her Uncle Tam, a happy-go-lucky bartender who would like to marry Mrs. Tam if only Geraldine would just go away and get married.

When Mrs. Tam is told by a fortune teller that she’s nearing death, she dreams of going “home” to China to pay her last respects, but she also wants to see her daughter married. But perhaps Mrs. Tam likes Geraldine’s presence in her house, Uncle Tam may not be that serious about his marriage intentions, and Geraldine herself could possibly be using her mother as an excuse not to get married …