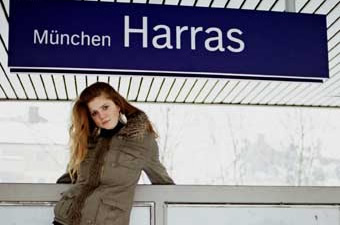 They’re friends and they met in a Munich refugee camp: 16-year-old Valentina from Kosovo and 17-year-old Suli, an Uyghur from northwest China. Both girls have been living in Munich for a number of years, but unlike Suli, Valentina doesn’t have a permanent resident’s permit, her family is merely tolerated for a couple of months each time. That’s the unsettled life she grew up und fought for selfconfidence in. She’s strong, she’s independent, she knows nothing about love, and she’s constantly hungry. Suli now has a room of her own but no longer any neighbours she can talk to.

Outside they feel free – in the anonymous city where they’re away from their brothers’, parents’, teachers’ and offices’ influence. Valentina is the leader of a girls’ gang, hanging out, playing football and wrestling while others go to school. Suli admires Valentina, but at times she also worries about her friend who doesn’t want to wait for better times but prefers to take charge of her life herself.