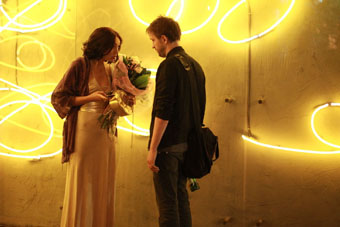 Night time in Munich. The Ukrainian Ruslana makes a living with an improvised distillery. When she accidentally floods her apartment, she receives unexpected help from Vladan, a former boxer from Serbia. The same night in Kiev. Ruslana’s son Bogdan is supposed to finally visit his mother in Munich, but he rather spends his time trying to woo a spoilt Ukrainian pop star for whom he until now has worked as a chauffeur and bodyguard. But Maria’s powerful lover Jora stands in their way.

And a night in Belgrade. Vladan also has a son in his former homeland. Zoran lives a modest and satisfied life in Belgrade. At one of his handyman jobs he meets the charming but temperamental young mother Jelena. Unfortunately, she has decided to leave his beloved city forever the very next day.