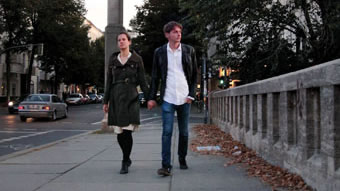 Felix and Katrin have been together for quite a while and live together. Felix works as a waiter. Katrin hates her economic studies and her job at a call center. Common dreams? They haven’t had those for a while either. When Katrin’s new friend Christina offers her a job as an assistant for a fashion shoot in Milan, Katrin suddenly feels like she has some perspectives in life, after all. But Felix doesn’t like her new friends and cannot share her euphoria, which doesn’t help their difficult relationship. Katrin’s mother is somewhat critical of her daughter’s relationship and wants to have a heart-to-heart talk with her. Felix seeks distraction with his friends in the pub.

On short notice, Christina cancels the job and Katrin’s newfound perspectives dissolve into thin air. Felix tries to back her up, both to cope with the disappointment and her upcoming exams. What seems like a new beginning turns into the realization that all their problems seem to stand between them like an abyss. Felix goes to see his ex-girlfriend Joni, while Katrin waits in vain for him in bed. Despite the fact that nothing really happens between Felix and Joni, Katrin seems to withdraw from Felix. When they coincidentally meet up in a bar one night, Katrin sends Felix a text message, ending their relationship.