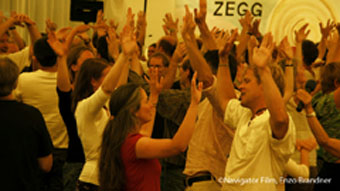 On the edge of the globalized world, hundreds of do-it-yourself states, micro-nations, eco-villages and secessionists are re-inventing the world and following alternatives forms of coexistence. This documentary adventure sets off on a journey to miniature kingdoms, jungle communes, Viking federations. New worlds are happening!

If the world doesn’t suit you, create your own! Paul Poet seeks out and finds six alternative worlds, islands full of the desire for social change, places of resistances and creative subversion: micro-nations, self-declared kingdoms, communes – hedonistic, sexually free, religious, punk, trashy. The anticipations and ambitions of the various nonconformists are entirely different, but what they have in common is a life outside all normality.