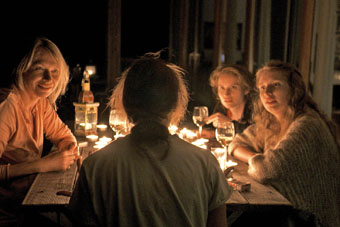 A sunny weekend in late summer. Rosa, a fisher and guardian of three picturesque lakes in Brandenburg, visits her lover Kristin, a successful architect. Rosa wants to finally have a sense of security in their relationship, but Kirsten keeps all doors open. Once again, sex replaces any sort of clarifying discussion.

Then Rosa meets two young girls from Berlin on one of the islands. Evi and Olivia have been together for four years, but that doesn’t keep Evi from coming on to Rosa. Despite the potential for conflict, the two girls join Rosa and Kirsten in Kirsten’s lake house. Their days are filled with flirting, trips out on the lake, sex and discussions about the various notions of happiness. The futures of both couples will not be unaffected by the magical atmosphere of this weekend…