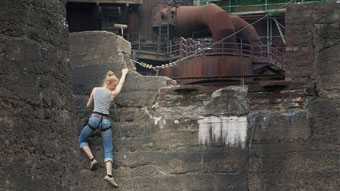 “Berlin: Employment continues to decline. The current figures regarding the employment rate are being evaluated by the Federal Government as a significant victory in the war on wage labor. Mankind’s dream of a life free of work and hardship will, in the coming years, come ever closer to being reality for large portions of the population. The difficult years in which the specter of full employment threatened to return have at last been overcome.”

The documentary film FREIGESTELLT begins with this news from the future. The news is presented by an animated news avatar who has just “released” her human rival.

Since the expulsion from paradise, mankind has been striving to achieve the paradisiacal primal state of abundance without work. Today, at the dawn of the post-industrial era, this vision is threatening to become reality.