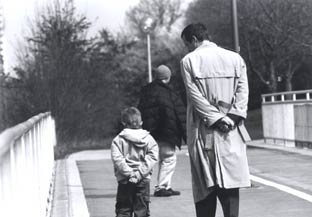 Making false promises, estate agent Max Schmidt tries to evict several families from an apartment house that is to be converted into an office building. His intentions are obvious to single mother Susanne Kirchner who manages to evade him for weeks – not too difficult given the confusing layout of Munich’s Olympic village. So Max gets flak from his boss. At Susanne’s doorstep he meets her 5-year-old son, Benny, whom he also makes false promises …