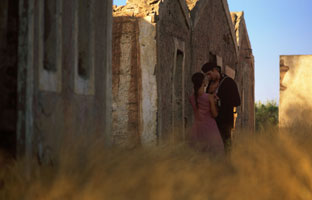 A day in the life of the elderly Greek museum attendant, Maria. As a young girl, she falls in love with a German sailor, Axel. Believing in his promise, she follows him to Germany and arrives at the appointed railway station, highly pregnant and full of hopes. The cold winter’s day passes, Maria waits and realizes how strange she must appear to those surrounding her.

In the meantime, the day in the civic museum also passes. People wander past the pictures and the old woman’s inscrutable smile until Maria asks the last visitors to leave and locks up. And as every evening, she stops for a while in front of her favourite picture …