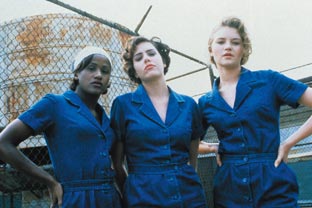 Sex, drugs, and rock & roll are all tied into this tangled (and campy) tale of the sordid side of the music business, set during the “Communist Witch Hunt” of the 1950s. Aggie is a young pop singer whose career is on the verge of a major breakthrough before she’s framed for the murder of a record producer by the devious Jennifer. Aggie finds herself sent up the river to the California State Penitentiary for Women, where she’s befriended by a pair of fellow convicts, Carol – a lesbian writer accused of being a Commie – and Melba, who gets all medieval on a hate-spewing TV commentator.

Together, they struggle to survive under grim circumstances as they plot their escape. Will Aggie be able to clear her name? Will Carol find the kind of love she’s been looking for? And most importantly, will the inmates get to take a long, hot shower?