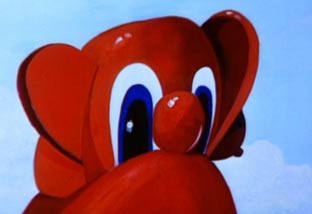 The film tells of a year in the life of George Condo, the New York artist. Condo was an ’80s NYC art scene star, and he was so revolted by the utter commercialization of his colleagues, that he fled the county, spending a decade in Paris. He came back with an international reputation and a ton of money, yet still honest in his work: cartoon-like images surrounded by abstract, pastel surroundings – nutcases, in a colourful, splashy world.