HENRY: PORTRAIT OF A SERIAL KILLER 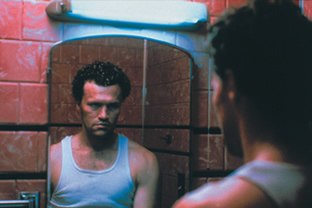 Becky has left her daughter, her abusive husband and her job as a topless dancer to find a better life in Chicago where she plans to stay with her brother, Otis. The two were brought up by a brutish father who beat them both and had sex with Becky. Otis now works at a gas station and sells marijuana to high school boys he tries to seduce. He shares a drab apartment with his former cellmate, Henry, who was jailed at fourteen for killing his mother, a prostitute who forced him to dress in women’s clothing and watch her have sex.

Otis meets Becky at the airport and brings her to his apartment. Henry behaves very gentlemanly towards Becky, who in turn is intrigued by him and feels at ease around him. He appears to have taken control of his life and is the first man to treat her with kindness and respect. The two begin a quiet courtship that Otis slowly becomes jealous of …