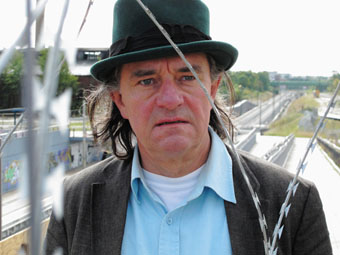 A post-heroic foray through the “new German states”. It’s been 20 years since the Wall fell, the Wall that separated the Federal Republic of Germany and the German Democratic Republic. In 1989 the Tübingen-based documentary filmmaker Stefan Paul took off to re-discover his old hometown of Leipzig and to experience “the change”. In the music scene, among artists, on the streets, in conversations: this was how his film HOTEL DEUTSCHLAND originated.

20 years later, Stefan Paul returns to the East, once again following the trail of the “language artist” Wolfgang “Zwieback” Krause from Leipzig, investigating the situation in the “flourishing cultural landscapes” that the former German chancellor Helmut Kohl raved about back then. “Time passed, but the cold front remained,” says Zwieback in HOTEL DEUTSCHLAND 2. Born to see, commissioned to observe. Berlin, Leipzig, Dresden and Halle are stations in the film. A musical journey between earlier and later times, with mental leaps full of visual charm, quiet melancholy, and precise exploration of the new. Conversations, scraps, encounters, vignettes of lifestyles: then and now.