I WANT MY COUNTRY BACK – THE TEA PARTY 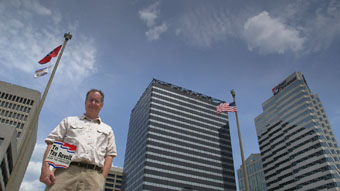 Ben Cunningham has been fighting for years for property rights and against tax hikes. He wants the U.S. government to stay out of domestic politics and his life. Ken Marrero is delivery man and wants to educate his five children with his wife at home. After 9/11, Tess C. and Ralph W. bought a mobile home so that they can get themselves to safety in the event of another terrorist attack. They are all members of the countless, nationwide Tea Party groups, which after Obama’s election shot out of the ground like mushrooms.